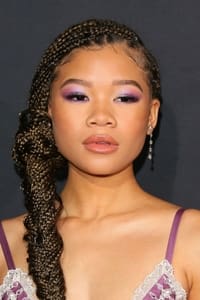 Reid was born on July 1, 2003, in Atlanta, Georgia to parents Rodney and Robyn. She has a brother, Josh, and two sisters, Iman and Paris. She made her film debut in the period drama film 12 Years a Slave (2013), and received further recognition for role as Meg Murry in the fantasy film A Wrinkle in Time (2018) and as Sydney Lanier in the horror film The Invisible Man (2020).

Advertisement
A Wrinkle in Time (2018)

A Happening of Monumental Proportions (2017)

Some movies or TV shows available in the United States starring or involving Storm Reid are, for example, One Way, The Suicide Squad and The Invisible Man.
The streaming services with the largest selection are Google Play, Amazon and iTunes.
The best StreamHint ratings are Euphoria (8.4), 12 Years a Slave (8.1) and The Suicide Squad (7.4).